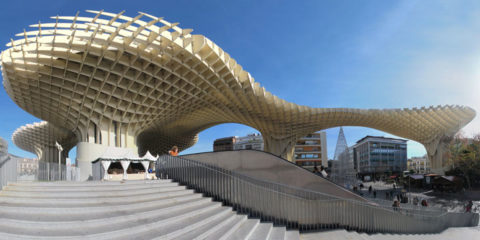 Also called the project Metropol Parasol mushrooms of Seville is a monument that is located in the plaza de la Encarnación in Seville, Andalusia. Made of concrete and wood with an incredible structure in the form of a pergola that measures approximately 150 meters long and 70 meters wide.

This monument is intended for tourism and commercial life of the city that’s that has low the with a traditional market where you can find everything. It also has a plaza for cultural shows day and night and the incredible Antiquarium archaeological museum.

With a cost of more than 86 million euro and a height of 26 meters this mushrooms of Seville it was designed and built by Sacyr and Jürgen Mayer, who even added a spectacular view from its terrace where you can see an incredible panoramic view of the beautiful and picturesque old part of the city.

His Majesty and greatness is such that it not only covers the plaza de la Encarnación but it also becomes the largest Plaza de Andalucía. A true work of engineering and architecture in which we can appreciate curves is all the senses and everywhere that gives a sense of movement and fluidity, as well as help to cover more space. 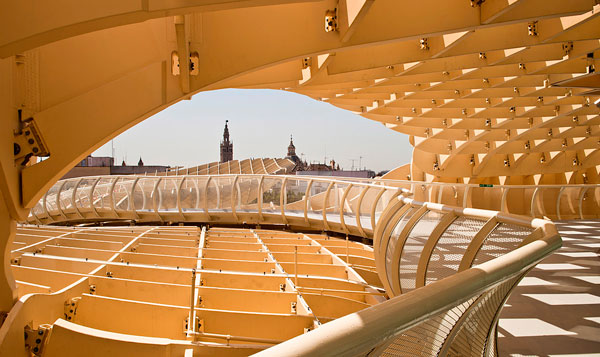 The construction of this was a completely open competition for the purpose of improving Seville, the City Council chose among many other Jüger Mayer as one of the most avant-garde project and why it is considered one of the most influential architecture to the history of the city.

Initially, its construction was not so successful and the delays it created concern and uncertainty in the general population that saw it partially toppled market of the incarnation so accustomed had the population, with all these details the cost of the construction of multiply exponentially and incredible resulting value.

But despite the delays and high costs of building this huge parasol became the main tourist site of the city, with an estimated of more than one million non-local visitors in just in the first year and that you either to walk to go shopping or spend the afternoon watching everything from the terraces is a spectacular place.

So incredible was the process of construction of this square to back the demolition and excavation were found belonging to the Roman and Andalusian period important archaeological rest so it had to stop construction when he had been an investment of more than 14 million euros.

Antiquarium of the mushrooms of Seville educational stroll 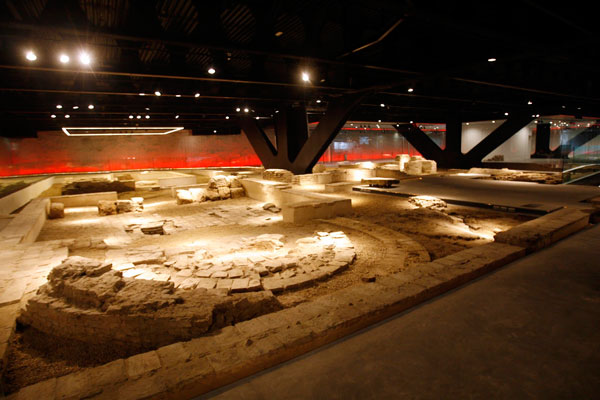 Antiquarium of the mushrooms of Seville

Post to withdraw remains continued with the construction of Sevillano mushrooms before set in that multiple spaces that would have would be used after built, with an international competition became a kind of voting and in addition to a market and other installation it was decided to allocate space to a museum where it could exhibit the artifacts found.

Because of the way that has the structure resembles a set of mushrooms which is why that soon people nicknamed him mushrooms square both was the popularity of the name the City Council decided that this would be its official and as the mushrooms in Seville name.

The entire structure of the mushrooms of Seville has four levels, the first is the terrace school it has a road concrete that gives the ability to traverse almost the entire structure of mushrooms or parasols, crowned with the spectacular viewpoint from all over the city in the other two levels that are larger is a restaurant and a guided tour where you can see the entire panorama.

The last level is the plaza Mayor that connects to square the incarnation through a stairway of the mushrooms and covered by umbrellas is a large space that is used for events and also for ideal varied shops for tourists.

In the basement are the archaeological museum and the Antiquarium, where you can see the artifacts discovered in the excavation of the site, also from there you can access directly to the top of the mushrooms using a lift.